When people we love pass on we are left with only our memories of them in our hearts and minds. Recalling touching moments tend to make us shed tears. Hysterical laughter ensues when remembering a funny story involving our loved one. Even a favorite phrase or saying sticks, and when heard again from the lips of another, immediately dredges up memories of the special person in your life who used the same expression.

Knowing they are no longer around to say them hurts the heart and soul like nothing else can.

My grandfather passed away in 2005 and the mere mention of his name makes a lump of tears form in my throat. We were very close and I had the privilege of growing up and listening to stories of his youth told in a deep, rhythmic baritone thick with a southern accent. As most storytellers, Grandpa loved an audience to regal with lavish tales of a world no longer around, interspersing the stories with nuggets of old-school values and ideals. Many humid summer nights were spent on the screened-in front porch shelling peas (yes, I shelled them but no, I refused to eat them) and listening to him talk about life in southern Arkansas. To say I miss those times would be an understatement.

One of his favorite sayings in response to the question, “How are you?” always made me laugh. He’d give a mischievous grin and reply, “I’m fine as frog hair!”

The first time I remember him saying the phrase I was around eight and I giggled. “Grampa! Frogs don’t have hair!” to which he replied, “Darling, it’s so fine you can’t see it, but it’s there. Some things you have to use your heart to see.”

At the age of eight, I really didn’t grasp the meaning of the explanation. All I knew was the phrase made me laugh whenever he said it, and the expression became a running joke between the two of us. The tradition carried on when my son was born, and my beloved grandfather passed on his wisdom, morals, and our family history to his great-grandson with each bedtime story.

Fine as Frog Hair is the title of my latest book, a short novel (under 12,000 words) with certain parts inspired by my grandfather. It’s a tribute to a man I loved, respected, and miss every day
.
Grandpa would cluck his tongue or shake his head if he heard someone use the expression “Those were the good old days.” His response? “Only to those who never experienced them.” This story explains why he felt that way, and how strong previous generations were in a very different world than we live in now.

I’m thrilled to announce the audio version will be narrated by Homer V. Jones. I cried when listening to his audition sample. Mr. Jones sounded so much like my grandfather it was eerie and wonderful at the same time.

Fine as Frog Hair is slated for release August 31, 2016 on all retail channels (Amazon, B&N, and iTunes) and is available for preorder for only .99 cents. The synopsis and an excerpt from Chapter 1 are below. 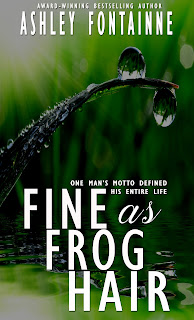 Can the past heal the future?
Ninety-year-old Marvin Hermesch is determined to find out.
After sneaking out of the retirement home on a hot and humid Sunday afternoon, Marvin embarks upon a journey. His memory is deteriorating fast, and he’s having difficulty recalling the face of his deceased wife, Ruthie.
As his short-term memory slips, it awakens memories buried deep from his younger days and vivid nightmares of his youth, including the horrors of World War II.
Armed with an empty journal, some water, and his trusty old truck, Marvin heads to his childhood home in the backwoods of Grant County, Arkansas for one last journey; one final battle.
Marvin fights to regain control of his mind and body by confronting the tragedies of the past in hopes of healing the future.