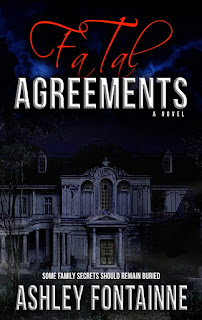 Fatal Agreements ebook and audio versions release April 23, 2018. The paperback is currently on sale. I am thrilled to partner again with the incredible voice talent of Andrea Emmes to bring the characters to life!

The paperback is available for purchase here and the ebook is on pre-order for the special price of $1.99 on Amazon, Nook, iTunes, and Kobo.

Whispered rumors tickled the ears of the residents of an entire town for decades about the disturbing secrets of the old Halstead House, dating all the way back to the early 1920s. Most people didn't believe them. Several people will soon discover they should have listened.

Three years after struggling to cope with the death of her beloved father and escaping an abusive relationship, Samantha Chapman decides it's time to return to her hometown of Hot Springs. She buys the ramshackle Halstead House, eager to transform the dilapidated, abandoned piece of history into her new law office and residence, hoping it will be the start of a brighter chapter and a safe haven to escape her personal demons.

Instead of newfound freedom, things take a dark turn when the resurrection of the old home reveals the disturbing secrets hidden within its walls. When youthful transgressions of numerous people come to light, including ones some members of the Chapman family are desperate to contain, it reveals the sins of the past. They collide with the grave mistakes of the present, creating a perfect storm of chaos and death for not only the Chapman family but others as well.

Others will get burned.

Sam and her loves ones realize some family secrets should have remained buried.

HOURS LATER, EARS ringing from her mother’s yelling, Sam stared at the ceiling while Suzy finished brushing her teeth in the bathroom. Ms. Townsend suspended her for three days, which ended up getting her grounded for three weeks. She didn’t care. The punishment was worth it because Kathy, Kip, and Tanya were suspended as well. She won her argument this time with Ms. Townsend.
After Resa showed the note to the principal, their plan in black and white doomed them. Less than twenty minutes after the battle in the cafeteria, several students humiliated by the trio in the past came forward. Once they spilled their stories, Kip was kicked off the track team, Kathy and Tanya stripped of being cheerleaders, and they all received a week’s suspension.
A soft knock on the bedroom door made Sam smile. Suzy slammed the bathroom door shut.
“Hey slugger. I brought some ice for your hand.”
“Thanks, Daddy.” Sam noticed the gleam in his baby blue eyes. It looked like he had some new grays, making his fading auburn hair shimmer under the overhead light. “Does this mean you aren’t mad at me anymore?”
Easing down on the edge of the bed, Big Sam smiled after handing the ice pack to his daughter. “Your ma’s the one who’s got her feathers all ruffled. Not me. I’m a preening peacock. You stood up for your kin when the bullies attacked. I’m proud of you.”
Sam’s mouth dropped open. “You are? Why didn’t you say something when Mom was tearing into me?”
“Because over the years, I learned when to try and battle your ma and when to let her have the reins and run amok. Tonight, I picked the latter.”
After resituating the ice pack, Sam asked, “When my grounding’s over, may I start watching L.A. Law on Thursday nights?”
Big Sam raised an inquisitive brow. “Fine by me but TV ain’t my preferred entertainment choice. You know your ma watches Knots Landing on Thursday nights. Good luck convincing her to give up her nighttime soaps. Why the sudden interest?”
Sam shrugged her shoulders. “I’m thinking about what I want to be when I grow up. Being a lawyer sounds like fun.”
Ruffling the mop of dark auburn curls on his daughter’s head, Big Sam smiled. “You can be anything you want, darling daughter. Put your mind to it and stay focused. I’m behind you, and your sister, one-hundred percent with whatever career choices picked.”
Yanking the door open, Suzy stormed out of the bathroom and jumped into bed. “I hope you aren’t letting her off the hook, Daddy. What she did was wrong.”
Sam gaped at her sister.
Big Sam chuckled, rising to his feet. He found it rather amusing the twins looked identical yet had polar-opposite personalities. One’s attitude was courtesy of his wife, and the other was more in tune with his laid-back style.
He sensed an epic battle looming between his girls. “Well, enough raging estrogen for one day. Time for me to retire to the back porch with a good book and cigar. Try not to leave marks on each other or make a mess, girls. Love you both.”
Neither sister spoke for a full minute after their father left. Sam sensed Suzy’s anger from the across the dark room. She couldn’t fathom why in the world her twin was mad at her instead of the mean kids at school.
“You ruined my life.”
“I…”
“My turn to talk, Sam! You did enough gabbing all day, and when talking didn’t work, you acted like a boxer. Don’t stick your nose into my personal life again. Ever. I’ll handle things on my own. You may not mind being a social outcast, but I do, so butt out.”
Stung by the harsh words, Sam remained quiet. Suzy had never, ever, spoken to her like that before. For thirteen years they were consumed by the tight, twin bond between them. Silent tears trickled from her eyes, soaking the pillowcase while fuming over the day’s events.
Streaks of lightning lit up their bedroom, followed by a crack of thunder so loud their beds shook. Sam was terrified of storms and Suzy knew it. Closing her eyes, she counted to ten, waiting for her sibling to come snuggle next to her like she always did when thunderstorms came.
Suzy never moved a muscle.
When the second boom rattled the bed, Sam’s eyes popped open. “Are you…?”
“No, I’m not. Deal with your fears while I handle mine.”
Sam sensed things would never be right between them. The knowledge made her sad and angry at the same time. She did nothing wrong and yet was being treated as though she did.
She wouldn’t grasp until many years later the devastating effects of the day’s incident, and how her actions to protect her sister would end up being the downfall of her entire family.