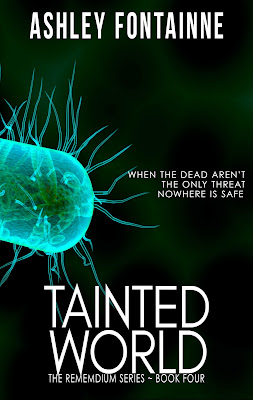 Exclusive sneak peek at the first chapter of Tainted World. Release date is December 15, 2017, exclusively through Amazon by clicking here. The fabulous Rebecca Roberts is lending her voice talent again to the series.


The final installment of what happens when a miraculous cure ends up destroying the entire world.

When Dr. Everett Berning’s discovery of a permanent cure for drug addiction fell into the hands of Benito San Nicholas, head of the Alvarado cartel in El Salvador – the end result was the dead took over the world.

In less than 48 hours, narcotics tainted with fungal spores are deployed around the globe and mankind’s existence hangs in the balance. Nowhere is safe as the death toll mounts and the reanimated corpses aren’t the only threat.

The remaining members of Project Rememdium and the small contingent of survivors from Arkansas band together. The decision is made to flee to a safer location, yet Teresa Alvarado had other intentions. Once in the air, hell-bent on finding Benito San Nicholas and killing him for what he’s done, Teresa Alvarado forced the pilot to take them to her native El Salvador.

Will Teresa’s own personal vendetta actually offer hope to Dr. Berning and the rest of the world?

Or will the dangerous jungles of El Salvador be the place where all hope is lost and they take their final breaths?