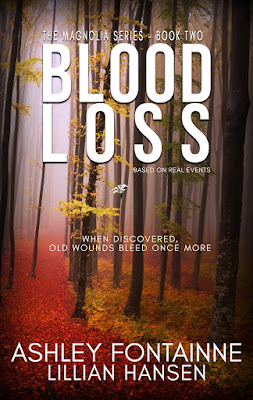 
The oily rumble inside her stomach told her it was too late for the feisty old woman to be saved by anyone, heavenly being or not.

Blood Loss is slated for release on September 4, 2017 in ebook, print and audio. I'm thrilled to announce Rebecca Roberts will once again provide the narration just as she did for Blood Ties, the first book in the series.

The disappearance of Maud Crawford, at the time this book was published, remains unsolved and still stands as one of the most baffling mysteries in Arkansas. To learn more about what a fascinating woman Maud Robinson Crawford was, please visit the following websites:

I regret that up until approached by a former resident of Camden, Arkansas, about this eerie case, I had never heard of Maud Crawford or the controversy surrounding her disappearance the evening of March 2, 1957. After several long conversations with this man and his perceptions on the mystery, I was hooked. I called my mother and told her our original concept for Blood Loss needed to be put on the backburner. We talked for over an hour, each of us drawn to the events in Southern Arkansas sixty years prior.

The finger of blame has been pointed at several people, yet the truth is, no one truly knows what happened that fateful evening. This fictional tale, based on true events, started out with the words “What if?” What if all the speculation and suspicion about the suspects was way off base? What if someone did witness what happened that night yet fled from fear they might be the next victim? What if the person, or persons, responsible for Maud Crawford’s disappearance stemmed from a direction no one ever looked? What if it wasn’t just a small town cover up?

Since the two main characters—retired Detective LiAnn Tuck and former private investigator and LiAnn’s daughter, Karina Summers—moved to Arkansas and took over running an independent living facility housing seniors who were alive in 1957, what better segue into exploring this real mystery?

The fictional conclusions of the final resting place of Maud Crawford are just that—fictional. In no way are they to be considered anything other than a product of our imaginations. My heart aches for the family members of all those involved and the incredible pain at never having the opportunity to experience some sort of closure on what really happened on the night of March 2, 1957. Maud Crawford was an amazing woman and her legacy lives on through all the organizations she helped create in Arkansas, and we both pray the truth will surface one day and justice will be meted out to the person or persons responsible for extinguishing a bright light in a dark world way before her time on this earth was over.