My guest today is the amazing Elaine Raco Chase! 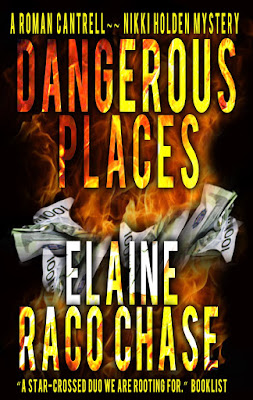 The story behind this story

Roman Cantrell and Nikki Holden were actually the first characters I ever created. They were born in 1978 in a book called All in the Family. I patterned the couple after Dashiell Hammett's wonderful duo Nick and Nora Charles. Nope, you never read it. It never saw the light of day because the mystery field was a closed market to a newbie author.

My career then shifted to an 'open market' – romance. I was thrilled by the response of readers and reviewers. All of my original Dell and Silhouette romance novels were #1 on Walden Books Romance Bestseller's List.

In 1985, Dell Publishing asked me to create a romantic mystery series and I pulled Roman and Nikki out of a drawer, updated and changed the plot, adding a lot of action and a sports theme. Off the Wall was born. Alas, my editor didn't like it. "Too hard. Too tough."

Hmmmm....I didn't think so. Neither did Bantam Books who grabbed up the series, changed the title to Dangerous Places and off it went. Garnering great reviews, hitting numerous wholesalers best seller's lists and spawning a lot of imitators.

Dark Corners followed as did even more reviews and a few movie options that never went anywhere. Rough Edges was to be the third in the series (with at least four other titles/synopses in the works.

However my life was altered – I was hit by a drunk driver, in a coma for twenty-four hours, broke, twisted, and pulled every part of my body as well as suffering permanent damage to the short muscles of my optic nerve.

It took me over 18 months to be able to walk and talk and even remember things but my vision was a mess. Luckily, we lived in Houston, Texas at that time. My husband worked mission control for NASA. One of the astronaut's suggested I see their vision specialist. Blessedly, he was able to figure out my problem and prescribe special glasses.

With the advent of eBooks, I've been able to update, expand, add new characters to all but two of my romance novels. Two I left as classics.

Now, I've pulled Roman and Nikki out of the past: 1987 and into the present! In this version of Dangerous Places you'll find new characters, expansion on some of the regular characters, expanded and new scenes and even a twist or two.

Nikki Holden's been brought back to her original hard-edged roots. She was always one of the strongest women characters I'd ever written but now she's even better! Roman Cantrell even sexier and funnier than before. Both are modern, sharp, sarcastic, funny and always headed into murder!


Sliding out of the car, her pumps hit the pavement. The click of her heels and the slap of her sling backs against the bottom of her feet echoed loudly, ricocheting off the cement walls and into the shadows. Her gaze darted down rows of parked cars and concrete columns.
Nothing appeared out of the ordinary.
The usual silence.
She squinted up at the light banks.
Were the fluorescents abnormally dim?
Or was that just her imagination?
Nikki inhaled deeply. The dank smell hadn't changed.
Everything appeared normal, calm, secure.
This was a security apartment, she reminded herself, then snickered.
Yet something had activated her brains circuitry and heightened her awareness.
Awareness of – what?
Nikki's senses tingled a warning down her spine. She'd walked these same fifty-seven steps to the elevator for the last month.
Knew them by heart.
Nothing was different tonight.
Nikki swallowed hard and looked back over her shoulder.
Was there?
Damn, her lips formed a scowl. If it was Cantrell again...Nikki flexed a wrist, her whack-a-mole practice would come into good use.
She walked faster. Her long legs eating up the distance to the glass partition that shielded the elevator. Pressing the call button, she listened to the elevator make its usual slow descent. The lights counted down from the tenth floor. When the door hissed open, Nikki quickly stepped to one side to let the occupant out.
Occupant?
Her mind registered bear.
Grizzly.
The man was enormous. Six foot six. Three hundred pounds. Short black dreadlocks hugged his massive head and dark curls sprouted from his open shirt collar. His torso resembled a tree trunk; his arms, two-by-fours.
It took her an extra minute to realize the grizzly wasn't alone. His companion's whipcord lean physique stepped clear of the gigantic shadow. He was as fair as the other man was dark. His blonde shaggy hairstyle sculpted a pinched face. Perspiration collected on his upper lip like a mustache. While both men were wearing well-tailored beige linen suits and light blue shirts, she quickly decided they were not typical businessmen.
Nikki offered a weak smile as a silent greeting before hastily walking around them and into the elevator. Hearing the blonde mutter something and watching both men turn, her hand quickly slammed against the control panel and the security of a closed door.
Grizzly's bulky arm effectively halted the elevator's operation. His dark eyes raked her from head to toe. "You're Nikki Holden."
She cleared her throat. "Not necessarily."
"Yeah," the blonde popped back his bubble gum, his voice nasal, "that's her. The boss's description matches. Say, is that hair color for real?"
"Yes. But I'll be glad to change it."
He snickered. "Mr. B said you were one snappy broad."
at December 07, 2015