Cover Reveal: The Ter’roc
We’re revealing the new beautiful cover designed by Blue Harvest Creative for The Ter’roc: Evolution, an epic science fiction novel about an ancient race of aliens that created the human species thousands of years ago. Steeped in science, historical fiction, philosophy and biology, this book introduces an intriguing new dimension to our own world and worlds beyond. 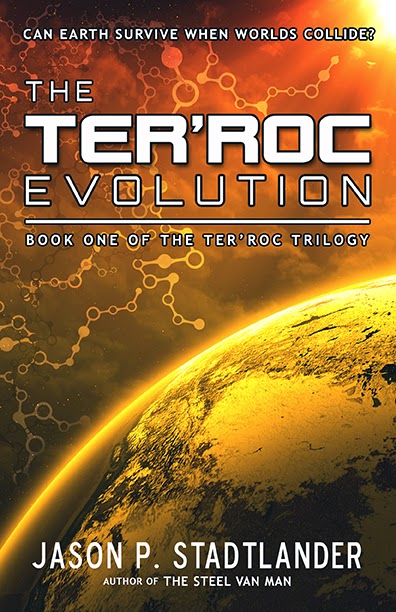 This novel is a continuance of the most popular story from Ruins of the Mind, the science fiction anthology of short stories written by Jason P. Stadtlander and published in June of 2012.  The Ter’roc: Evolution is the first in a three-part series which contains references to ancient structures such as the pyramids of Giza, Stonehenge and more, but reveals the larger purpose behind these structures steeped in mystery—purposes often wondered about but never before revealed.

When a teenage tomboy named Shawn ventures into a storm drain near the railroad tracks in Swampscott, Massachusetts, she stumbles upon more than a few blue glass pieces she is foraging. She comes face to face with Sam’loc of the alien ter’roc species, the initial link to discovering ancient hidden truths and a key revelation concerning humanity’s past. This initial face-to-face with Sam’loc draws Shawn unexpectedly into a world never before encountered—knowingly at least—by others. In the process, she is called upon to challenge more than she ever thought possible and rises to the occasion in ways she never expected.

The ter’roc and ishkan are ancient alien species which seeded the Earth with humans tens of thousands of years ago. These two species have remained hidden, however, watching over and guiding us unobtrusively when needed. Only now are they making themselves known to help defend Earth against a threat too powerful for humans to fight alone.

Along the way, we will find that there is much more to humanity than simply being human.