As I have mentioned in previous posts, I never intended to become a writer. It sort of just happened. Writing poetry and short stories was a personal, private release for me. Occasionally, I would share with family and friends but that was it. However, while attending college (as a 40+ year old woman--talk about feeling out of place!) in hopes of graduating with a degree in science, the writing volcano erupted from its dormant state.

Spurred on by the gauntlet of challenge to "write a book" thrown down by my Creative Writing II instructor (Melody Berning--thank you) I wrote Accountable to None as my semester project and turned it in as part of my writing portfolio in March of 2011.

Things haven't been the same since!

Tens of thousands of book sales later, over 300+ reviews on Amazon/Amazon UK (for all of my novels combined) I am pleased to announce that my latest offering, the suspense novella Number Seventy-Five is a finalist for the 2013 Readers' Favorite International Book Contest for Fiction/Suspense.

The novella is less than 20,000 words but apparently, packs quite the punch (at least according to the majority of reviews) and is the only non-full length work that made the final cut in this tough category. Reviewer Dianna Skowera from Readers' Favorite wrote a glowing 5-star review:


“Number Seventy-Five” by Ashley Fontainne is a chilling suspense from the moment you learn the reasoning behind the title. Seconds after meeting Mandy Russell you discover that she is slapped with the realization she is about to become the seventy-fifth victim in an eerie killing rampage. Mandy recovers from a bitter divorce with the courage to test the waters of internet dating that ultimately seals her fate in ways she never imagined possible. Licking the old wounds of heartache, Mandy learns that only her two close friends, Shawna and Samuel, were not likely enough to inform of her decision to forge into the world of finding new love in such a low-key manner. Rendezvousing out of the spotlight may have saved her from the embarrassment of failed romantic success, but may just contribute to Mandy’s lack of chance in escaping death.

Think you don’t have time to read a book? Each page of this short work pulls you towards the end like a magnet! Anyone looking to compile stories about God-fearing women should get a hold of Ashley Fontainne. Fontainne has created a new genre of scary stories to tell in the dark…and on vacation. The most creative use of description I have read in nearly any work of fiction, “Number Seventy-Five” is guaranteed to pull you into the characters’ senses. There are more emotions and action in these seventy-two pages than one may find in works twice as long. If you think Lifetime Movie Network women are scary, then check out “Number Seventy-Five”. This could happen in your small town, so read this book and be prepared!

I had already entered Number Seventy-Five into the 2013 contest but didn't think it stood a chance since it is barely a novella. Then, on June 30, 2013, the email notifying me that the finalists had been picked beeped on my phone. When I clicked on the link and scrolled down to Fiction/Suspense, my heart skipped a beat. (Really, it did. Then I dropped my phone and ran to the kitchen to find my husband, tripping over my cat along the way. Surprised I didn't break something important!)

Because there was my name. One of the final six.

I have been riding this roller coaster called "writing" for just over two years now and am honored to have my work recognized by such a prestigious organization as Readers' Favorite, and to have my work included alongside such other fabulous authors!

Stay tuned because the winners in each category will be announced on September 1, 2013. 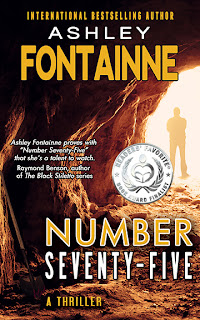