The End...and a New Beginning

2012 was a stellar year, and not because we all survived the Mayan doomsday in December!

2012 was full of many challenges and triumphs for me personally. After the incredible journey that December 2011 took me on, when January 2012 rolled around, I didn't believe that the success of my first novel, Accountable to None, could be topped. Boy, was I wrong!

I left the small press I had the sequel, Zero Balance with and went back to my Indie roots. Then in April of 2012, I started a BlogTalk Radio Show as a way to give back to the Indie Author community. The show became a success, especially after Bennet Pomerantz joined as my co-host. With the show in full swing and both novels doing well on Amazon, I set out to finish the third and final installment in the series, Adjusting Journal Entries. Then, while doing the 'marketing rounds' when Adjusting Journal Entries was released, I was a guest on Artist First Radio (a CBS Radio News Affiliate). A few days after my appearance, the owner of the station contacted me and asked if I would be interested in hosting my OWN radio show on Artist First! Once I picked myself up off the floor, of course I said yes. Bing, bang, boom, THE ASHLEY FONTAINNE SHOW was born. Every Sunday night at 8 p.m. EST / 7 p.m. CST I get the chance to interview authors from around the world. How cool is that?

It was during the summer of 2012 that I met and connected with the incredible graphic design team, Blue Harvest Creative. After viewing the stunning work they created for other authors, I decided that my series needed an upgrade. WOW! Did I ever get my money's worth and so much more.

New interiors, new covers, an imprint and updated formatting for the ebook and paperback versions were completed in late 2012. The upgrades worked, because as soon as the new and improved versions hit the virtual shelves, sales soared. (Thank you Joni and Vern. You guys ROCK!)

I have waffled back and forth with keeping all of my electronic versions of my novels in the KDP program during the last six months. After all, if it weren't for Amazon, I wouldn't be able to say I hit #1. In December of 2012, I wanted to see if I could top the 2011 numbers and put Accountable to None up for free again. This time, it didn't just hit #1 in Suspense--it hit #1 OVERALL. Let me assure you, there was a LOT of jumping around at the Fontainne household! My little college creative writing project still has gusto.

But, as with all things, and end must come before a new beginning starts. The decision that I have bounced back and forth on for months has been made. Once all my novels finish their current 90-day term on KDP, they will then be made available for Nook and Kobo users. This won't happen until March of 2013, once the entire trilogy opts out of the program.

So, what does this mean for you? Well, this will be the LAST time that Zero Balance and the ONLY time that Adjusting Journal Entries will be available for free on Amazon. 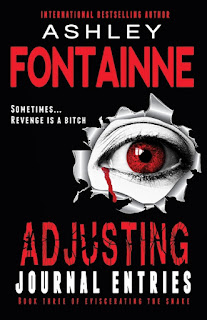 A sincere thank you to my family, friends, fellow authors, the wickedly awesome team at Blue Harvest and most importantly, my fans. Let's make 2013 the best yet!