June 25, 2012 marks what would have been the 65th wedding anniversary of my beloved Grandparents.

65th.  An amazing accomplishment that I have no doubt would have been met with a grand party indeed.

Two loving souls from different parts of the country with varying backgrounds. My grandmother was born to a Danish immigrant mother that spoke not one word of English when she arrived in the U.S. at the ripe old age of 18. Her father was also an immigrant that hailed from Ireland that at least spoke the language, albeit with a heavy Irish brogue.  They met while working at a large plantation home in South Carolina: she was a maid and he was the gardener.  No words were spoken between them for a year, just a single rose sitting at Mama's table in the back part of the kitchen each morning.  Soon, Papa whisked her away to Nebraska and they began life anew.  My grandmother was their second child and only daughter.  Her fiery spirit, flowing red hair, love for music and desperation to remove herself from the dusty, barren fields of Nebraska led her to Southern California, only weeks before the onslaught of World War II.

My grandfather, who liked to refer to his multi-dimensional ethnic heritage as being a "Heinz 57," was born and raised on a cotton farm in Southern Arkansas, the eldest of two sons born to poor but happy sharecroppers. His mother was half Cherokee Indian and his father was German, which started his life out with a distinct disadvantage in terms of social acceptance and temperament. In December of 1941, at the  age of 16, he ran away from home and lied about his age, altering the family's Bible (which was the only official record of his birth) and joined the Navy. This act was not because he felt the desire to leave his harsh life at home, but the strong pull of patriotism and love for his country after the invasion of Pearl Harbor.

Call it fate, call it karma, call it whatever you like, but I call it the gentle hand of the Lord that guided these two together.  Turns out, grandma's older brother was also serving on the U.S.S. Langley with my grandfather and they became friends while sharing the same quarters.  My uncle had a picture of my grandmother in his locker, and I remember my grandfather telling me that once he "...saw that face, those eyes and legs, she was the girl!" He would laugh as he swore that was the reason that he became such close friends with my great-uncle, but we all knew it was just an inside family joke.  Truth was, after surviving the attack by the Japanese that eventually sunk the Langley, both my grandfather and my great-uncle became extremely close, their bond solidified by things neither would ever speak of, yet never forget.

When the war ended, the two destined souls finally met, thanks to some high end finagling of my great-uncle.  And just as grandpa predicted, she became his "girl" on June 25, 1947.

By the time I came along as the first and only grandchild, they had endured a lifetime of happiness and tragedy in sunny California.  Both experienced World War II, the Korean War, the first man to walk on the moon, the invention of the television.  Grandpa started working construction during the boom after the war, and was part of the large crew that constructed the majority of the Southern California highway system. Life was good for their small little family that consisted of my mother and my uncle, until Vietnam.

They watched helplessly as their one and only son was sent off to Vietnam, praying each day for his safe return, only to suffer even more upon his return home as a drug addicted, broken man that only found solace in the hard core drugs that within two years, snuffed out his life. It was their son's sudden, tragic passing that caused my grandpa to heed the pull of home and pack up their belongings and move "back to where he belonged" to South Arkansas.

I was only 5 years old when they left, and I was completely devastated.  My grandparents were my world, so every summer, I made the long airplane ride from California to Arkansas.  The memories of the summers I spent with them are forever a part of me.  Their love for each other and for me helped mold me into the woman I am today.  At 16, the summer visit ended with me deciding to stay in Arkansas, which is where I have been ever since.

My grandparents taught me so many things during their time here on this earth.  Love, family, respect, history, strength and faith.  At the age of 62, my grandfather heeded the call and surrendered to preach.  He spent his remaining years visiting nursing homes and preaching the Gospel of Jesus Christ. Although they each were broken when their son died, they both felt they were given a gift, a second chance at loving a son, when my own dearest son came along.

Although I miss them both terribly, I keep their memory alive each day in my heart, remembering everything they taught me, hoping that as they watch from Heaven, they are proud of the woman I have become. Even though I wish they were still here, I take comfort in the knowledge that, one day, I will be reunited with them in Heaven for all eternity. These thoughts keep the tears at bay and bring the smile to my face when the longing to see them becomes too great.

I love you both, my dear ones. Thank you for being the most important forces in my life. May I always make you proud. I have no doubt that celebrating your anniversary in Heaven exceeds any celebration we could offer, though I wish, for a brief moment, I could hug you both once again and say "Happy Anniversary!" 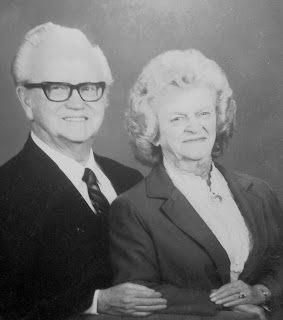 Links to my books in the US:
Accountable to None
Zero Balance
Ramblings of a Mad Southern Woman

Links to my books in the UK:
Accountable to None
Zero Balance
Ramblings of a Mad Southern Woman