Today's blog is dedicated to the author of Doppelganger Experiment, Margaret Millmore! 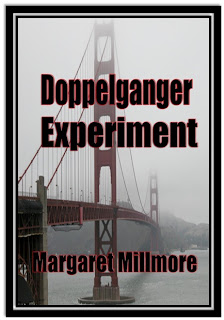 What kind of books do you write and how many have you written so far?
Margaret: I write thrillers/suspense (with a little paranormal twist). I have one published work, however I have another completed novel, which I hope to ‘clean up’ and have published in the next year or so.

When is your next book being published?
Margaret: As I mentioned above, I have another book that was completed prior to my published novel Doppelganger Experiment, and I’m working on a third, I’m not really sure though when the next two will be published, hopefully within the next year.

When did you start writing?
Margaret: The opportunity came up for me to write seriously 3 years ago, but I’ve always made up stories and hoped some day to have the time to write them down.

How did you get into writing, and why did you pick the genre that you currently write in?
Margaret: When I was young I really wanted to be a writer, but life took me on a different course, and then as life often does, it switched courses and now I’m writing. I’m an avid reader and a huge fan of almost all fiction (particularly Ray Bradbury, Stephen King, Dean Koontz … and so many others) so that sort of set the tone for the genre.
What is your creative process like?
Margaret:Once an idea is in my head I sit down and start writing, but after a few chapters I’m usually stuck, so I outline what I have and try to turn that outline into what I want. Generally the outline is useless to me because then a little thing will happen (I’ll see an odd looking tree, or it’s something someone says, a butterfly will cross my path, I mean really little, inconsequential things) and since I’m constantly thinking about what I’m currently writing on, that little thing will send me off in a different direction and the next thing I know, I have a book….

Who is your favorite author, past and present, and why?
Margaret: I have two, I can’t decide between them so they’re both my favorites: Ray Bradbury and Stephen King. I love their imaginations, the characters they build, the way they make me feel when I read their books, honestly it’s like drug addiction when a new book of theirs comes out, I literally cannot put them down.  I actually will not read their books unless I can dedicate enough uninterrupted time to read them from cover to cover, that’s how much I love them.

What motivates you to continue writing?
Margaret: I love it, but I’ve also got the most wonderful and supportive group of family and friends and they are relentless in their encouragement to keep going, plus these pesky ideas are in my head and they want out….

How do you get ideas for your stories?
Margaret: In the case of Doppelganger Experiment, the basic idea had been with me for a long time, so I started with that (a person waking up without any memory of their recent life), but it expanded and turned into what it is today due to something my father-in-law said. He had been dozing on the couch and mumbled in his sleep, he said “stay away from the green building on the left”, that one mysterious comment sparked my imagination and stuck with me the entire evening and I woke up with the rest of the idea for the book.  That’s basically how it happens, a general idea and then someone says something or does something or I see something and off I go.

If you didn’t become an author, what do you think you would be doing now?
Margaret: I had a successful career in the commercial real estate field for seventeen years, I guess if I had continued with that, it’s what I’d be doing now.

Tell me about your latest book.
Margaret: Doppelganger Experiment is psychological thriller based in San Francisco with a touch of the paranormal: After more than four weeks in a coma, Jane woke up to find several things wrong; she didn’t remember the last three years, she was married to a man she didn’t know, and frightening dreams were infiltrating her sleep. But were they dreams or memories? As she struggles to recapture a life she doesn’t remember, she discovers clues that lead to flashes of memories and the discovery of horrific experiments that end in murder... and something worse than murder.  She must uncover the secret to the experiments to recover her life and end the horrible things that are happening.

Your movie has made it to the big screen!  Tell me, who would you want to play the key characters?
Margaret: This may sound silly, but I hardly ever go to, or watch movies, I’m a bookworm and prefer to read over TV/movies, that being said I’m just not familiar with today’s big screen stars (or even small screen stars).  Most of my characters are in their thirties and I can’t think of anyone in that age range, although I do think that Leonardo DiCaprio would make a great Brett and I think Samuel L. Jackson would make a great Franklin (although he may be too tall).

What’s the worst experience and best experience you ever had as a writer?
Margaret: Bad reviews and good reviews top the list. But overall I think the worst part is the process of finding an agent or publisher, it’s an endless process of submissions and rejections and it really can get depressing and make you want to give up. On the bright side, I think finishing a manuscript and feeling good about what you created is a fantastic experience, having a publisher feel the same way, well that is priceless.

Where do you see yourself in five years with your writing and your life?
Margaret: I hope to have written a few more books and entertained a lot of people with them.

Where can people find you and your books on the Internet?
Margaret: It’s available at most on-line retailers, here are the links:
www.margaretmillmore.com
http://www.margaretmillmore.com/featured_authors
http://www.facebook.com/#!/profile.php?id=100002915649470
http://www.linkedin.com/pub/margaret-millmore/4/a6b/6a9
http://www.barnesandnoble.com/s/margaret-millmore?store=book&r=1
http://www.amazon.com/Doppelganger-Experiment-Margaret-Millmore/dp/1937593207/ref=sr_1_1?ie=UTF8&qid=1318857839&sr=8-1#_
at November 11, 2011